The following is an article from the June 2020 edition of LD+A Magazine, republished with permission from the Illuminating Engineering Society (IES).

At the end of the day it’s always about location. Situated downtown just a short walk away from the Washington State Convention Center, the Space Needle and Pike Place Market, the Hyatt Regency Seattle appeals to traveling professionals and tourists alike. Striving to compete with smaller convention locations in the area, the owners of the towering 45-story building chose HLB Lighting Design to help develop an all-encompassing conference space within the hotel. “The client was looking to develop a facility in which attendees can stay at the hotel while the convention can operate across dozens of smaller meeting rooms, as well as the distinct and unique large ballrooms,” recalls lead project designer Michael Lindsey (Denver). 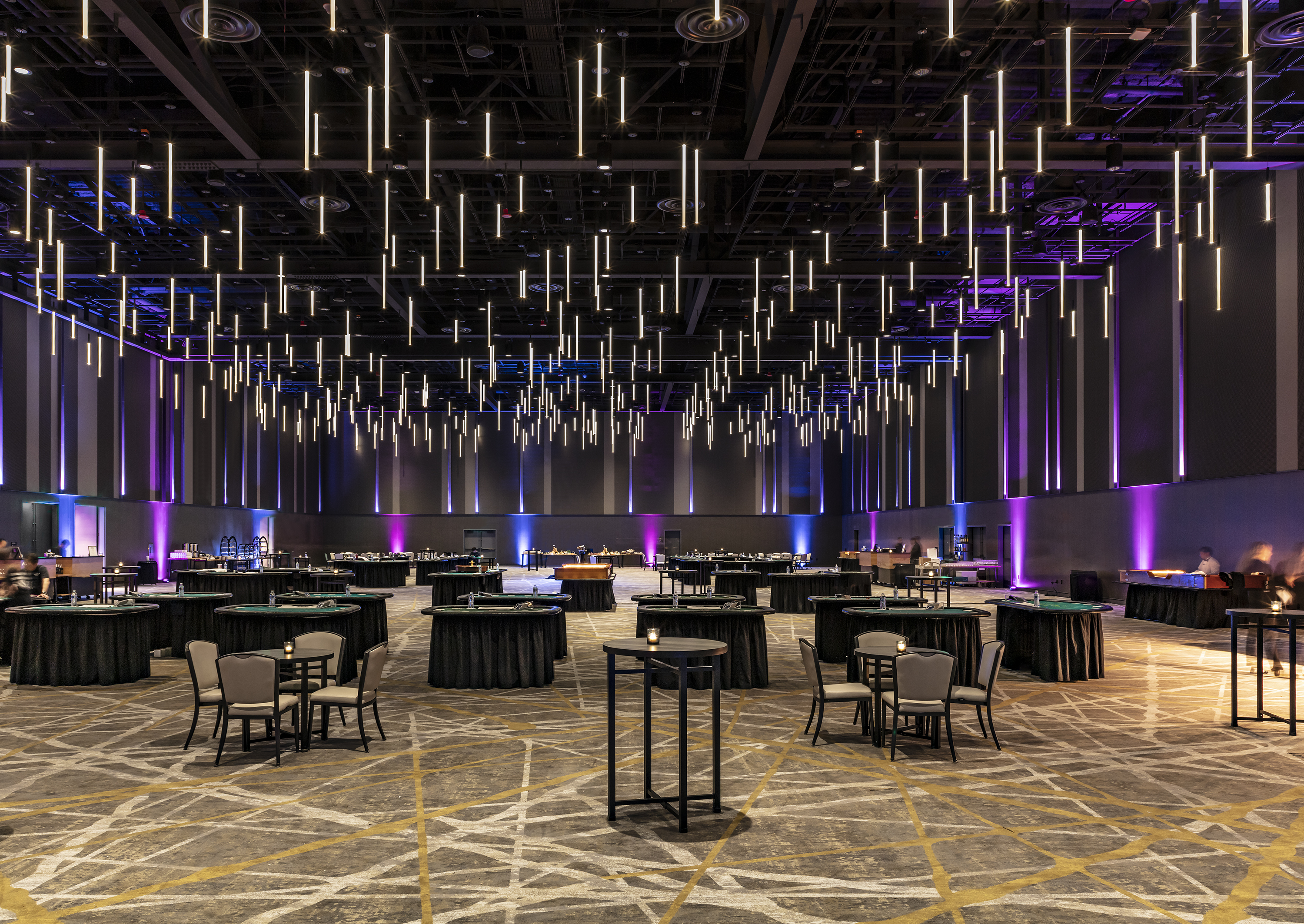 Working alongside fellow HLB lighting designer Lupita Legaspi-Castellanos (Los Angeles) and LMN Architects, Lindsey developed a design that combined a welcoming atmosphere with standout fixtures in public spaces and destination ballrooms where flexibility and performance are key, but character and mood are also essential. The 1.2 million-sq ft project, which began in 2013, was put on hold until 2014 and then continued through 2018, during which time HLB moved forward developing three different lighting approaches to the ballrooms. “Developing solutions that were reactive to the architectural characteristics really challenged the team,” says Lindsey. Tunable LED technology, color-changing lighting and suspended linear pendants are leveraged in varying degrees to create three distinct experiences in four different spaces.

“The most challenging and exciting aspect of the project was creating the ballrooms with an individual character and purpose,” says Lindsey, who tailored the lighting to match the architectural design elements of each. The Columbia ballroom, designated by the design team as the “wood box” ballroom and designed to embody the Pacific Northwest, uses tunable-white LED fixtures integrated into the woodpaneled
walls and ceiling. The fixtures can change from warm to cool based on how the room is being utilized. The Regency ballroom, the hotel’s second largest venue, uses decorative lighting elements to create a virtual ceiling plane that is fully adjustable via lighting controls. The Elwha and Quinault junior ballrooms, made for smaller gatherings, use hidden color-changing fixtures allowing the rooms to be “branded” by the organizations using them.

Sign up for emails to get the latest scoop on new product, project features, and more.

Outside of the ballrooms, the design team sought to create a memorable yet comforting approach to the hotel’s public spaces so as not to overwhelm exhausted travelers on their way to and from their rooms. Perimeter-mounted lighting fixtures are used to create an unobstructed ceiling plane in the circulation space adjacent to the primary meeting rooms. The fixtures bring light into the center of the space, while a toe-kick light supports the welcoming atmosphere by adding another layer of illumination, a tactic HLB used alongside dimming controls in multiple areas to add to the aura of hospitality. Low positions of lighting via table and floor lamps, as well as lighting integrated into permanent furniture elements, also add to the layered lighting effect.

Cost and sustainability were also taken into account throughout the overall design. “We looked to work collaboratively with the (architectural) team to reduce cost in the highly repetitive and large quantity areas like the guestrooms, to allow additional expenditure at focal public and experience areas,” says Lindsey. 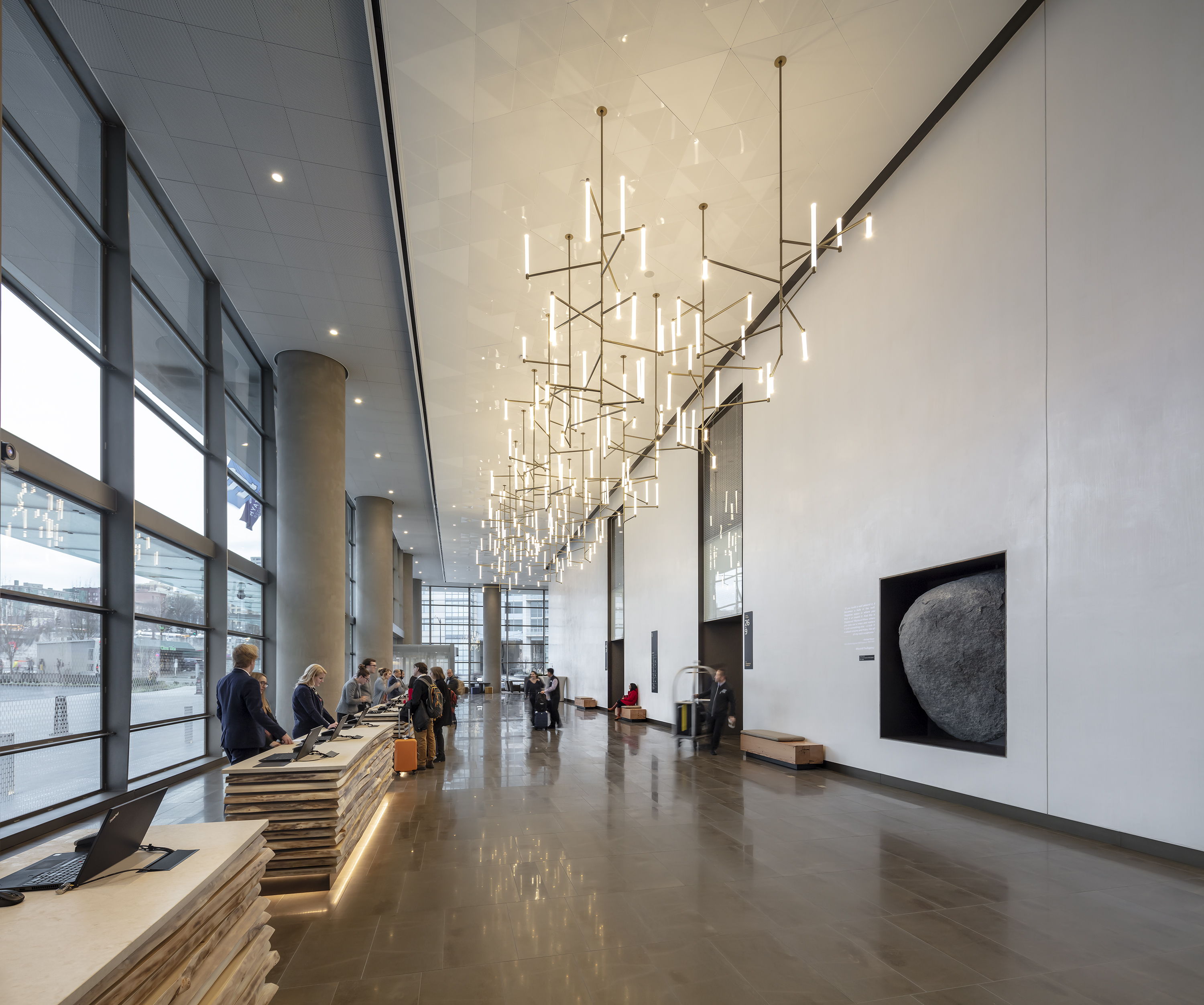 A standout example of this is the custom chandelier in the main lobby. On-site assembly and the need to adhere to seismic code was a challenge, but didn’t deter the choice for the lobby’s largescale, signature element. “The key was having a strong concept and engaging with the lighting manufacturer (OCL Lighting) from the beginning to the end and leaning on their expertise to turn the vision into a reality,” says Lindsey. The tunable lighting and controls used throughout the design also helped the project achieve a LEED Gold certification.

Two independent restaurants and a whiskey bar closed out HLB’s to-do list. While the locations add to the hotel’s “everything included” appeal for conferences, the lighting designers also saw it as an opportunity to take wary travelers and busy conference-goers out of their element by creating “luxe” yet slower-paced atmospheres. Daniel’s Broiler restaurant, which includes the Rickhouse Whiskey Bar, is designed with lush finishes that Lindsey and Legaspi-Castellanos complemented with warm and rich lighting. Carefully detailed and integrated lighting features were chosen for the Andare Kitchen restaurant, which sports views directly out onto the street level. With both restaurants adjacent to high-traffic areas in the hotel lobby, a smooth lighting transition was created to maintain the intimate feel of the locations. The restaurants allow guests to feel as though they’ve stepped away from their hectic schedules without ever having to leave the hotel.